I may be a little late to the party, but this week I watched the 2014 drama “Interstellar” directed by Christopher Nolan. The film is as visually striking as one would come to expect with a Christopher Nolan film. From the scenes in outer space to the dystopian dust filled earth featured in the film, it was breathtaking.

Without spoiling too much even this late to the game, Interstellar is based on earth in a near future where dust storms and lack of both food and oxygen are threatening life to extinction. Cooper (Matthew Mcconaughey) pilots a small group into a black hole in order to search for a new planet to call home for the human race.

Standout performances were abound in this film, including Mcconaughey who shined in the lead role. However I actually think it was Mcconaughey’s partner on the mission, Dr Brand (Anne Hatheway) who really stole the scenes. Her blend of being stoic and scientific yet being so emotional and heartfelt touched me. Other standout performances in less significant roles were Dr Mann (Matt Damon) and adult Tom (Casey Affleck) Both in smaller roles had scenes that added emotional punch to the film. Damon showing the lengths that a human will go to avoid isolation,on his attack of Mcconaughey. Tom had an emotional scene shown via webcam that would make anyone shed a tear. 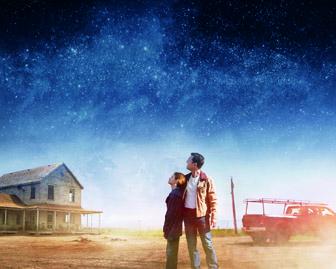 Interstellar to me was a piece that can at times be a bit overwhelming, as someone who does not know an awful lot about space travel some of the concepts were a little hard to grasp. I think that while the film did a good job of making the piece as easy as possible to grasp for the audience, the idea of a fifth dimension is something that I struggled with. I must admit I had to go and do a little bit of research reading about the science behind a tesseract. My only previous knowledge of a tesseract is in the marvel cinematic universe.

Another strength for this film was the score. A real space opera was orchestrated with a perfect blend of cinematic tension building scene followed by deafening silence that can build just as much suspense. The film uses sound that not only adds to the On-screen performance; but also adds an element of emotion of the film. This film is absolutely deserving of an Oscar nomination for best score.

Interstellar seems to me to be a landmark film for the science fiction genera adding a layer of science, research, and realism that up until now has been untapped. Of the cluster of space films including Gravity, Martian, and Interstellar I believe Interstellar stands head and shoulders above the rest.